Mr Samuelsson has been instrumental in overseeing a wholesale operational and financial transformation of Volvo Cars since he took the position of chief executive in 2012, recording record sales and profits several years in a row.

Since 2014, Volvo Cars has launched an all new range of cars that has positioned the Volvo brand as a credible contender in the global premium market, including the multiple award-winning XC90 and the successor to Europe’s best-selling premium mid-size SUV, the XC60.

The Golden Steering Wheel award is presented annually by publishing house Springer and the Bild Group, a German magazine group including AutoBild and Bild am Sonntag. Mr Samuelsson was the 35th winner of the event, which was presented to him at a gala event on Tuesday evening in Berlin by Tom Drechsler, chief automotiove editor of Bild Group and AutoBild.

“It is a great honor for me to accept this prestigious award,” said Håkan Samuelsson as he received the award. “I lived in Germany for ten years and I am well aware of the high level of attention the automobile industry receives in this country. That is why I appreciate this award even more. As a manufacturer from Sweden, it is very special to be successful here, not only for me personally but for all employees at Volvo Cars.”

Mr Drechsler attributed the decision to Volvo’s recently announced electrification strategy and the launch of its electrified performance arm Polestar.

“Håkan Samuelsson guided Volvo to sustainable profitability following the takeover by Geely Holding in 2010. The hard work of recent years has paid off. Thanks to the renewal of the model range with the XC90, XC60 and S90/V90, sales figures have increased to record levels.

“Furthermore, this year Mr Samuelsson took the decision to electrify every new Volvo model entering the market from 2019, and will be the first European producer to challenge Tesla, also from 2019, with three new models of the new electric performance brand Polestar.”

Volvo Cars announced this summer that from 2019 every new Volvo-branded car launched will have an electric motor, making it the first established car company to fully embrace electrification and place it at the core of its future business.

In October it announced, in conjunction with the launch of the first Polestar-branded vehicle, that together with Geely Holding it will invest RMB 5 billion (EUR 640 million) to support the initial phase of Polestar’s product, brand and industrial development.

The investment highlights the financial muscle and industrial and manufacturing expertise Polestar will have access to, and establishes the fully consolidated Volvo Cars subsidiary as a stand-alone electrified performance car company. 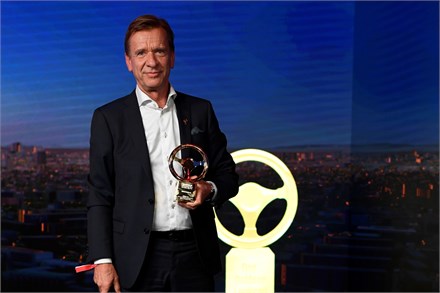